First impression: this is going to be the easiest set up yet. Much of the kit is pre-assembled. We’ll see how that impression works out.

It’s advertised that it takes only 5 minutes to put the printer together. This is not necessarily true for someone assembling it for the first time. The instructions provided in the user’s guide are sufficient, but not great.

It’s worth noting here that the printer did not ship with a physical user’s guide, and I couldn’t find a copy anywhere online. So at first I thought I was going to have to figure it out myself, but I discovered that the user’s guide (and much more) is loaded onto the SD card that shipped with the printer (I should’ve assumed).

The bottom line: I’ve assembled a few other printers and this one was BY FAR the easiest to assemble.

Given that the printer was designed for fast and easy assembly, one might suspect that the designers compromised on rigidity, but this is not the case. The printer’s frame is made of extruded aluminum, making it very sturdy. This is probably one of the most important features of the printer.

Unfortunately, the printer I received was previously used (for what I’m not sure) and some of the components were loose, causing problems with my initial prints, and requiring that I disassemble and diagnose the issues. In the end, I got it sorted out, but I was not terribly impressed with the condition of the printer I received. After a little bit of work the printer was in great shape, and ready to print.

The motion system design of the Z10M2 is very similar to one of our favorite affordable printers, the Creality Ender 3. Both utilize V-Slot aluminum channels and POM wheels which makes for a smooth, quiet, and high quality print.

Unlike the Ender 3 though, I did not find any concentric nuts used to tighten the wheels around the aluminum channels. When I first assembled the printer the extruder was extremely loose along the x-axis rail. I had to remove the wheels and push the bearings in place. Fortunately, upon reassembly, the extruder was secure and without and wobble.

Note: I attempted a print without first fixing the extruder wobble. This led to some downstream problems that were hard to diagnose. Moral of the story: inspect the entire printer and ensure the components are tight.

If you’re looking for a compact, portable printer, this is not the one :) The base and the frame are 21.06” x 20.87” x 23.23”, which I would label a medium-to-large-sized printer. While it may not be small, the obvious benefit of a larger printer is larger prints!

Another disadvantage, in my opinion, is that the control box is detached from the base. There are pros and cons to this design, but portability is important to me. If you’ve got a permanent spot for your printer, this may not a problem for you.

An important feature of this printer is the heated bed. This is a requirement for printing ABS and it’s a nice to have for PLA. As always we recommend buying a glass bed for quicker, easier prints.

There is one very important thing to note–eveling the bed is a huge pain. This is probably the biggest flaw in the design of the printer. The adjustment knobs are extremely difficult to turn, which is not something I’ve encountered. They are so difficult, in fact, that I have to put a lot of downward pressure on the bed in order to loosen or tighten the knob underneath. Also, being that the knobs are hard to adjust, I actually have to lift the printer to get a good enough grasp. This means leveling the bed takes quite a bit longer than it should.

The one advantage, albeit small, is that there is a built-in feature that automatically moves the hot end to each of the four corners to help you level.

The Z10M2 uses Bowden-style extruders, which means the motors that feeds the filament are separated from the hot end.

There are two things to note. First, this is a dual extruder printer. There is one extruder mounted at either side of the x-axis rail (so they move along the z-axis with the hot end), and each feed filament through a tube into a single hot end.

The obvious benefit of dual extrusion is that you can print in multiple colors without having to stop the print and change filaments. Another valuable use case is to use a dissolvable filament to print supports, giving you the ability to print more complex, gravity-defying models.

One of the most obvious benefits of this printer is the large print volume. At 300mm x 300mm x 400mm, this allows you to print fairly large models.

To be honest, I’ve not yet needed to print something that requires this large of a printer. So unless you know you need a large printer, I would consider this a nice-to-have, but not a requirement.

As mentioned previously, the control box is detached from the base. For me, this is a disadvantage, but I can easily see how this variation could be perfect for some use cases.

The control box features a nice backlit LCD screen that lets you easily control all of the basic functions of the printer–most importantly selecting a model and starting the print! The controller uses the very familiar Marlin firmware, which is used to drive most 3d printers.

This printer can print PLA, ABS, PETG, HIPS, PVA, and others, but the recommended filament is PLA.

There is nothing major to note about the print process. This prints standard gcode files that can be loaded via a micro SD card slot in the control box. The control interface allows you to select the file from the card and begin the print.

In good conscience I can’t recommend this printer to a beginner (or possibly an intermediate level user). It’s possible that my poor experience is due to this printer being previously used for demos. At one point early on, I actually had to drill into one of the brackets in order to fix what seemed to be a result of wear and tear.

Worst of all, I was unable to successfully begin a print due to a few (what seems to be) software related issues. Initially, I couldn’t level the bed because what the printer considered the “0” position on the z-axis was a few millimeters higher than the highest point the bed could reach. But when I hit “Auto Home” it would go to “-10mm” on the z-axis. I spent many, many hours messing with various settings on the printer to no avail.

I ultimately upgraded the firmware, hoping that this would magically fix the issue, but it did not. The behavior did change, however, but there was a new problem. I was able to get the bed leveled properly, but when I started the print using the test gcode provided by the manufacturer, the first layer began at 0.6mm which ruined the first layer.

So I threw in the towel. I will likely continue screwing around with this printer, and if I find success I will update this review, but I think my recommendation will not change. This is a difficult printer to get started with, which is not ideal for many users. 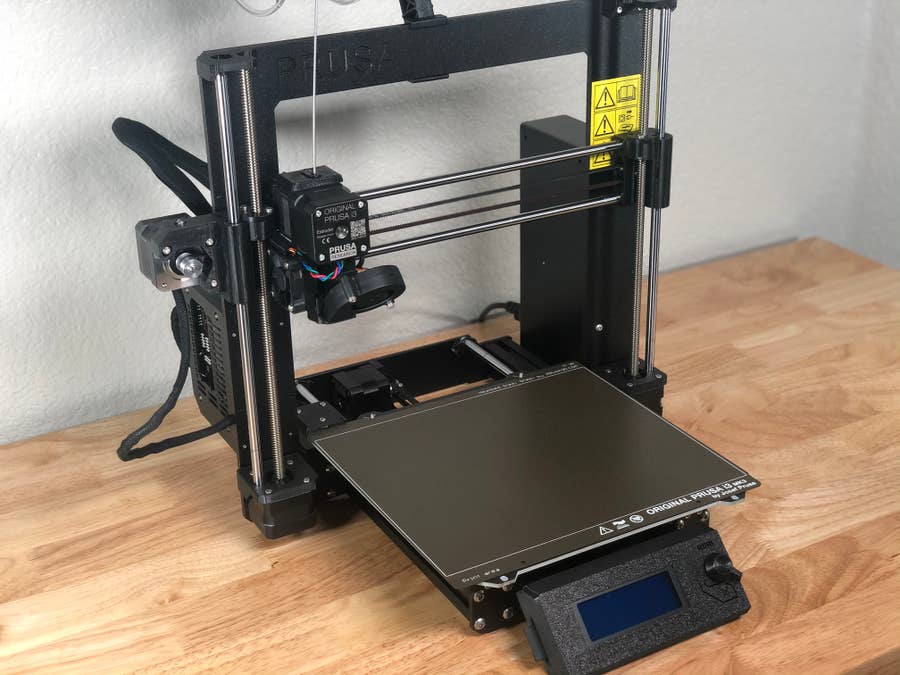 An incredible desktop 3D printer for a great price

The Prusa i3 is an open-source, self-replicating printer. There are many great 3D printers on the market that are based on Prusa's designs.