Keep Cats Off the Counter

Give Cat a Bath

The anatomy of your cat's claws

If you want to skip to the claw-cutting core of this guide, skip down to step two!

Cats have very different claws than humans do, and while this is no surprise to anyone, their claws do share some similarities to humans' claws. Let's take a look at what's going on down there.

For starters, cat's claws are retractable which means that when they're relaxed, they're sheathed by skin, fur, and toe pads (toes beans as they shall henceforth be referred to as). This allows them to stalk their prey in the wild getting as close as they can before unsheathing their claws to come in for the kill.

It's possible for humans to extend a cat's claws by pressing on top of their paws which pushes the claw from its hiding spot. It doesn't take a lot of pressure to extend their claws.

The anatomy of the claws

Claws are made of a strong substance called keratin which grows in layers around the quick. The quick is very important to the cat's claw and their health. Keratin allows the claws to grow in layers, which allows the claw to fall off naturally. Now, let's talk about the quick because that's vital when it comes to cutting your cat's claws.

In short, the quick refers to the collection of blood vessels, nerves, and other tissues that helps the claw itself to grow. Humans also have quicks but, instead of help the nail grow, they protect the bed of the nail.

The quick shouldn't be cut.

For cats, it's usually easy to see the quick because it's usually a different color than the nail itself. Most cats have light-colored claws while the quick is triangular in shape and pink.

For cats with darker claws, seeing the quick can be a little difficult which means you're more likely to clip it accidentally. Doing so will cause the cat some pain and it will likely bleed for a time but it will heal.

That's a cat's claws in a nutshell! Now, I'll show you how to trim a cat's claws by yourself, so you can keep yourself — and your cat — safe.

Do I need to trim a cat's nails?

Just like with whether you should bathe a cat, my instinct is to say yes, if you are asking this question. Trimming a cat's nails regularly will help protect you and your family from cuts. It will also protect your furniture and rugs. While you can buy a scratching post for a cat, that sometimes only works to sharpen the cat's claws into an even deadlier little set of weapons. So, if your cat's nails are causing issues and scratching things, then you should absolutely take the time to trim them regularly. It's not cruel, so long as it's done properly. (Which is why you're here!)

Grab some clippers, grab your cat, and let's get started.

Approach your cat when they are relaxed

When it comes to trimming your cat's claws, timing is everything.

What do I mean by this?

The ideal mood for a cat who is getting its claws cut is relaxed, either after an exhausting play session, while they're sleepy, or in a groggy, after-meal state.

If you know you want to trim your cat's claws, you're going to have to plan for it. Break out the laser pointer, the feather attached to the string and pole, and play with your cat until they're tired until they're ready to plop down and rest.

Tired cats will be less likely to jump up and attack something they spy. This brings me to the second point, the setting.

Set yourself up for success by choosing the right location for the nail trim.

You're going to want the following things in your make-shift nail salon:

Cats are finicky creatures. They can go from relaxed to playful to murderous in a manner of seconds. Subvert this by issuing your manicure in a room where there are few things to be distracted by, and fewer things to pounce on.

In short? Make sure you're both far away from distractions.

As much as you might want to keep your cat off the counter, maybe this is the one moment you allow it—if it helps to calm them down.

Ease into the process

If you grab your cat, plop down, and start trimming, your cat could become tense and tense cats can transform their paws from toe beans to murder daggers in seconds.

Don't force the issue by applying more pressure to keep them still.

You can ease them into the process by touching their paws for a few seconds, gently massaging them, and seeing if they pull away. If your cat is relaxed, they won't likely pull their paws away.

If they're not relaxed, they'll likely tug their paws away. If they pull away, let them. Don't force the issue by applying more pressure to keep them still. If they're relaxed and still pulling their paws away, they might not feel comfortable with the sensation of having their paws touched. You can work up to this by touching their paws a little bit each day.

This is a good practice, too, if you want to get them acquainted with the clippers. Place your cat in your lap and hold the clippers next to her, clipping them once or twice to acquaint her with the sound. You can bride your cat with treats, too, if they seem skittish by the clipper.

Once they're comfortable, you're ready for the next stage: trimming those claws.

Place your cat in your lap

Start by sitting comfortably yourself and placing your cat in your lap. Allow them to get comfortable while ensuring that you still have access to their paws.

Carefully take hold of your cat's paws and expose the claw

When it comes to exposing the claw from its toe bean and fur sheath, gently press on the paw, focusing on the specific nail you're going to cut. This will expose the nail.

You'll be able to feel the joint that houses each nail, similar to the way you feel knuckles on a human hand.

Remember - Don't press too hard. Pressing too hard might make your cat retract their paw, making it difficult to actually trim them.

Cutting your cat's claws without getting hurt

Now that you've exposed the nail, you're ready for the most challenging part: cutting the claw.

Trimming your cat's claws will get easier with time!

Take some time to locate the quick of the nail before you cut it. Remember - it's the pink, triangular portion at the base of the nail. For reference, you're going to be cutting the tip.

Gently place the clippers against the nail and trim off the sharp tip. This usually equates to 1/4" or less. Don't try and rush yourself. Take your time and make sure you give plenty of space between the quick and the new end of the nail that you're creating.

Trim claws over a period of time

If you find that your cat isn't taking well to the sensation of having their claws cut, don't worry. It's perfectly okay to split up the trimming over a few hours or days. It's important not to rush through the trimming process.

What to do if you cut the quick

Don't panic if you cut the quick, especially if your cat starts to panic in the process. If we're being honest, it's likely to happen, at least once.

Thankfully, cutting the quick is not a serious injury and it will heal over time. It will, however, be painful and it will bleed.

Many specialists recommend keeping an antihemorrhagic styptic on hand to help with any accidentally cut quick. A styptic is a substance capable of stopping bleeding and applied to a wound.

Now that your cat no longer has intense claws, treat them so they associate the experience positively! Cats, for whatever reason, have impeccable memories. (I even think they can remember each time I try to give my cats a pill.)

Unfortunately, this means that they'll associate and remember negative experiences. So, if you cut the quick, you'll probably have to start retraining them to get them comfortable with having their claws cut.

Fortunately, with enough positive association, they'll be likely to tolerate nail cutting in the event.

There are a ton of clippers that you can use, some of which even have little guides that will only clip off a shallow tip of the nail to ensure the quick is never punctured.

Clippers like this CleanHouse provides a safety guard that will help protect the quick. They also lock if you want to clip larger claws like a dog's claws.

Boom, that's it! You're prepared to trim your cat's claws without getting hurt and without hurting your cat. It's simple but it will take time and effort. Have patience and remember your love for your cat, even if the murder daggers are unsheathed.

Keep Cats Off the Counter

Give Cat a Bath

Get Rid of Cat Pee Smell 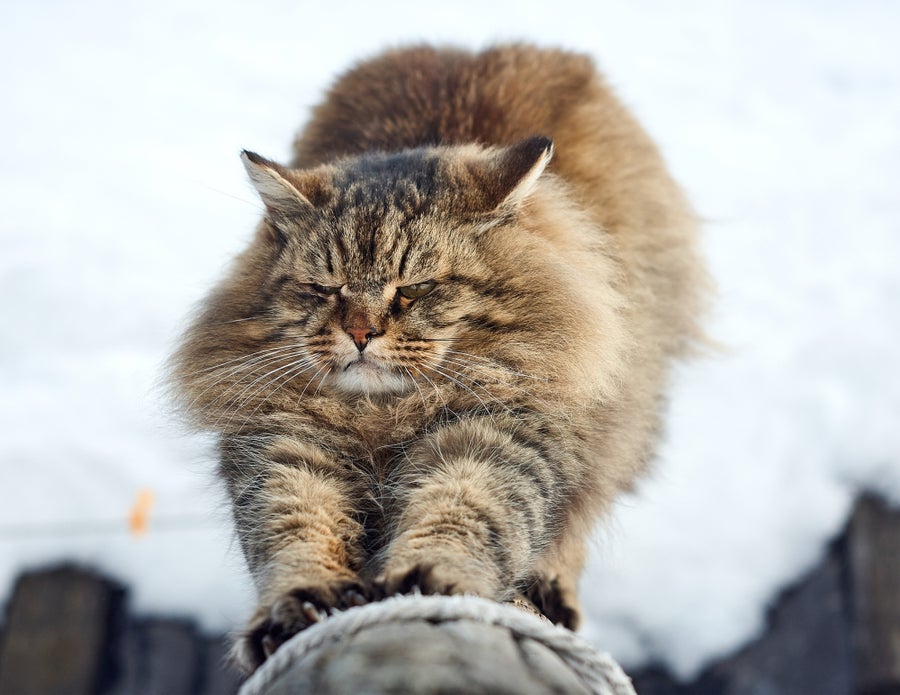 Scratching pads for your cat are easy to make!

If there's anything cat owners can agree upon, it's this: cats scratch.